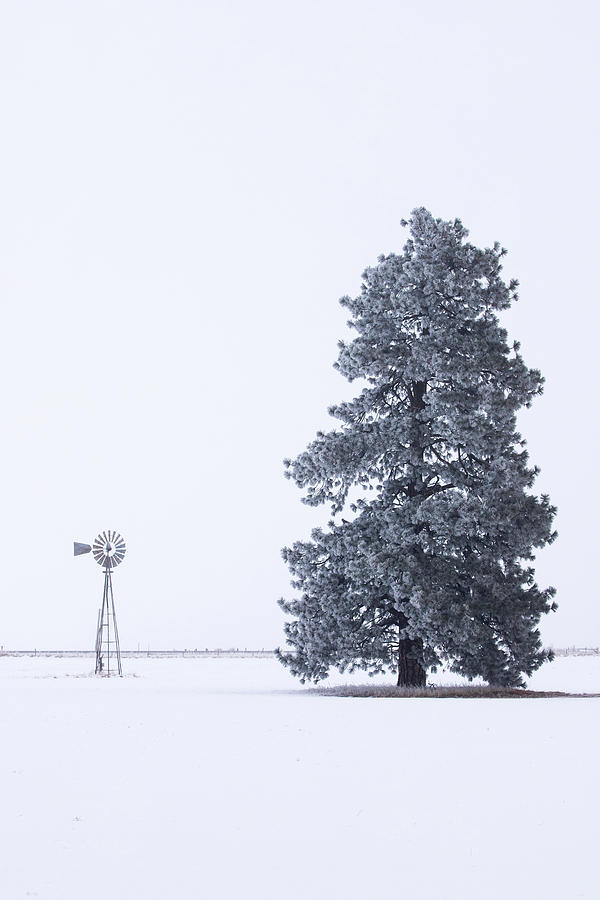 I’ve always liked this old windmill sitting next to this even older ponderosa pine down the road a mile or so from my Janesville California home. Unfortunately, from a photographic standpoint, it is surrounded by lots of buildings, etc, that wouldn’t look particularly attractive in a photograph. Fortunately, on this day the freezing fog and hoar frost alleviated those potential downsides.

It’s common for us to get freezing fog and hoar frost on cold winter days after a good dose of snow like what occurred a few days before this image was captured. Hoar frost gets its name from the old English (or would it be Olde English?) word 𝘩𝘰𝘢𝘳 which basically means old or weathered, such as a white beard. This is a good description for the thick frost as it makes some things, like trees, look like they’re sprouting white beards.

Lots of folks also refer to this fog and the frost it creats as Pogonip from the Shoshone word 𝘱𝘢𝘬𝘦𝘯𝘢𝘱𝘱𝘦𝘩 for fog..

The highway ribbon that can be seen in the background is US 395 which runs north/south from southern California to the Canadian border. For much of the year it's very busy but on a cold December morning like this one it gets pretty quiet.

This image, while of a naturally "monochromatic" scene is a color image. The early morning light combined with that fog and frost just really subdued the tones but I think those subdued hues add something to the image so I opted to leave it in color.

I really like the composition of this. Well done!

Thank you, Robert and, it is indeed!

Congratulations Mike for your Best of Minimalism artist for Dec16-31, This is an outstanding image!

Thank you but it's a color image. Tones were just subdued that foggy morning :)

Wonderful, chose in Best of Minimalism

Thank you very much, Renata!

Congratulations! This simple and essential image is a Featured Image in the Best of Minimalism group.

Beautiful combination of scene elements. My minimalism group POD for 12/23/21.

Thank you very much, Gary!